How to Eliminate Failure in Your GMAT Prep

Wouldn’t it be nice to be able to commit yourself to anything and get it done?

Wouldn’t you like to be able to complete on things that you claim you’ll do?

Why don’t those things happen? 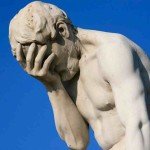 There are simply a lot of things that we aren’t going to do because we’re human beings.

What does that mean?

Basically, in a lot of cases, we are completely unaware that we have a problem. This leads to the first of Ferriss’ four steps.

Ferriss suggests that would-be dieters take a photo of themselves in underwear or a swimsuit before embarking on the diet.

After all, if you don’t know what you want to avoid, how can you avoid it?

Something like this in your GMAT prep would be to take a printout of your GMAT Prep results and post them in a conspicuous place: the fridge door, the bathroom mirror, etc.

In this case, you will see them every day and know what you have to beat.

Don’t be discouraged—this is what you are better than, and you know it.

As Ferriss wisely says, “Ignoring it won’t fix it, so capture it and use it.”

There are many different ways that this can be done. Raising OR lowering amounts of light in factories has been found to increase worker productivity, simply because the workers thought they were being watched more.

More to the point, however, is Ferriss’ assertion that measurement equals motivation.

If you are conscious of the effect of the smallest change to your working strategy—whether that is an ability to do a type of problem that you couldn’t do before, or whether it is a firm 20-point increase in your practice scores, realize that the ability to quantify this shows progress.

As long as it can be quantified, it can be bet on. Wouldn’t you believe it?

Bet against your friends that you can increase your score faster than they can, or that your completion of the Official Guide (link) will outpace theirs.

Or simply bet someone that you will spend at least ten hours a week studying for the GMAT. Ten hours? Not as much commitment as it seems, and will be thoroughly useful!

At this point, you have to decide whether the Carrot or the Stick will be your motivational method of choice.

For certain things, the Carrot—a reward—works much better. I find that when it comes to raising money, for example, I am much better at finding the money for a project than I would be if someone threatened me—a Stick—with losing the project altogether.

However, when it comes to other projects, such as writing, I’m much more motivated by someone threatening me or the fear of, say, reaching fewer clients than I am by the pride of having written something good.

That’s nice, but it’s not what makes me work.

Figure out what you’re after—in my GMAT case, it has always been pushing for a higher score rather than worrying about what will happen if I get a low score.

So figure it out—is reaching a high score your goal, or is fear of losing because you don’t reach a high score actually what you’re after?

Even a simple understanding of whether it’s a carrot or a stick will make a huge difference to your motivation.

4) Make It Small and Temporary

CHUNK DOWN, as they say in NLP.

Think about what the tiniest measurable thing that you can do today is. Make it meaningful, and get started. Just make a list of things to do tomorrow, if nothing else.

Simply try to do something in the next ten minutes.

Find a practice set and see how many questions you can get correct out of 10 (if you’re just getting started, I advise against the Diagnostic Test in the Official Guide).

Find an accountability buddy to make sure that you get things done.

Just get started—get the ball rolling. Starting is 90% of the battle. Once you’re in the thick of it, you don’t have to worry anymore.

Over time, as long as you get started, the rest will take care of itself.

p.s. Ramit Sethi suggests, after having studied the biographies of many ultra-successful people, that daily exercise is one of the few constants. 100% of the top performers he researched exercise every day.

p.p.s. What is your Time Vortex? How do you plan to fix it this week?