Is Your MIND Playing Tricks on Your GMAT Prep?

The Only Thing to Fear: Fear Itself

It may sound cliché, but our minds actually play a large role on whether we have success or not.

Did you ever go to an interview thinking that it will go horribly, the other participants will be way more prepared and experienced than you, and the interviewer will surely ask you the only one thing that you don’t know well? Did you get that job?

Or did you perhaps ever deliver a presentation to a large audience, fearing beforehand that you might panic, your mind going blank? Did you end up delivering a confident and successful speech anyway?

Or did you play a sports match convinced that your opponent would surely crush you? Did you give 100% to that game? Did you succeed?

Everyone has had an experience where they were convinced of failure, only to come out victorious.

We have all been prey to these “Limiting Beliefs.” 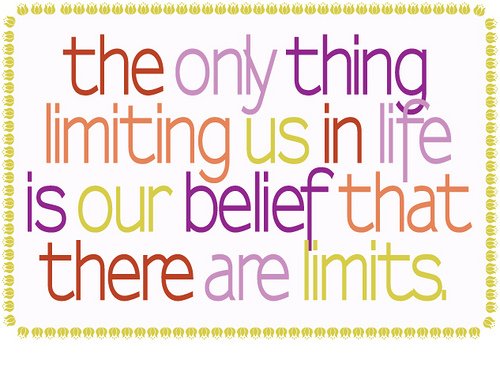 What is a Limiting Belief?

Inherently, beliefs are a good thing. We form beliefs because they simplify our lives. If you, as a child, cut your hand with a knife, your formed the belief that knifes can be dangerous, and now handle them with care. This is an example of a positive belief, which is there to protect you. Other positive beliefs may be thinking you are a lucky person. These are beliefs you should not touch, as they serve you well (studies show, for instance, that optimistic people live longer).

Unfortunately, during the course of your life, we also form beliefs that work against us. These are Limiting Beliefs, filters that we apply to reality in an unproductive (and often totally irrational) way.

If you ever find yourself thinking anything like this…

“I cannot do this because…”

“It will go badly, because…”

…then you need to stop yourself and analyze your thoughts. These sorts of thoughts may end up forming Self-Fulfilling Prophecies: you will be so convinced that you will fail, that you will actually end up unconsciously doing all the things that will lead you to failure.

To uncover your negative beliefs you have to pay attention to your daily thoughts and if some thought is negative, ask yourself why you think in such a negative way. This will uncover your belief.

This is not easy, as often Limiting beliefs were formed in our minds when we were very young, and lie deep in our subconscious. With practice, however, you will get better and better at recognizing what thoughts are illegitimately preventing you from doing your best.

How to Defeat Limiting Beliefs

Once this is done, choose to stop agreeing with Limiting Beliefs.

Do you think you are bad at math and thus will underperform in the numerical part of the GMAT? Not true, you may have formed this belief due to one or more experiences (e.g. your primary school teacher telling you that you are bad at division, or your F grade in that high school test you hadn’t prepared that much for), but this does not mean they are the absolute truth. Nobody was born knowing formulas: to excel, you need to practice hard with Discipline and Determination.

If your Limiting Beliefs are strong, and come in the form of elaborate thoughts (e.g. every time you think about the day of the test you imagine very vividly how you will fail), then you can Re-Frame them into positive beliefs.

Start turning your Limiting beliefs into positive beliefs (“Yes, I will surely get a top score”), and you will have gained the most powerful ally there is: yourself.

Want to Know More? Talk to a GMAT Coach today.